The perfect presents for men, those who ‘have everything’ or a just hard to find presents for. I have a selection of prints available to buy on my website, starting from £45. We can produce them on their own, mounted or framed. I also now offer bespoke canvas prints, in any proportional size up to a maximum width of 3 metres, which fills a LOT of wall space (but probably won’t fit in a stocking!) Please contact me on catherine@catherineingleby.com for pricing.

All the Giclée prints are produced using lightfast ink on acid free 360gsm art paper, individually signed and numbered. Each edition is a run of 250. They take around ten days to produce and frame, although possibly longer as we get very busy in the run up to Christmas. The order deadline is the 12th of December, after we cannot guarantee production & delivery in time for Christmas day.

For those who cannot choose between the prints I have also produced gift vouchers. These are embossed, and gilded, and make a wonderful present to give to someone to redeem the blue of your choice against originals artwork, prints or commissions.

2013 has been a great year.
I think at the outset I was determined it was going to be a good one. 2012 had been pretty shit, I badly broke my ankle, and then, having recovered from that, was diagnosed with cancer. There seems to be a general view that skin cancer is somehow a less dangerous form of cancer, more of a cosmetic irritation. Which I admit, was probably a view I also held. (Got a dodgy mole – just get it chopped off; problem solved.) Turns out, that’s not how it works, and skin cancer is as frightening a black hole to look into as any other cancer. I was lucky.

So, my aims for 2013 were to get fit and healthy, and to acquire an agent/gallery in London, plus at least one other in the UK.
I also wanted to grow my ‘brand’ through PR, social media, retail outlets, and by entering a selection of Art competitions. People always seem surprised when they ask me about my daily working life how much time is spent away from the studio, but being successful as an artist is largely about being successful as a business. No one is going to wander into your studio and buy enough art to warrant you to pay tax. So it was a happy moment taking this photo of my picture “Ivy Leaping” in prime position in the window of Oil & Water in Wandsworth, another goal ticked off the list!

I also signed up with The Stockbridge Gallery in Hampshire, and managed to get into the BBC wildlife artist of the year finals. It has been clear through my work that I’ve managed to rediscover sense of joy, that I think had been noticeably absent.
I’ve tried to be bolder, more experimental and use greater colour than ever before, and have found that this has seeped out of the studio and into what I eat, what I wear and my outlook on life in general.

I am excited about 2014, about the opportunities and possibilities that lie ahead; my solo show with Oil and Water Gallery in June 2014, the competitions coming up, and of course, the many and varied people that I so love meeting in the course of work. I feel very blessed (well, except for the tax bill obvs!)
Happy New Year

I’ve been spreading myself far and wide in the past couple of months entering pretty much every art competition going. My painting ‘Stags in Rut’ was awarded ‘Commended’ in its category in the BBC Wildlife Artist of the year, and I was given a lovely certificate, (though frankly would have quite liked the free safari and/or some cash!) and I got to spend the day in Marwell Zoo with the immensely talented Fran Sanders , who is a genuine wildlife artist.

I did wonder if I could stretch the boundaries of truth and enter the Sky.com portrait competition which is offering a very lucrative prize pot. Ironically I trained as a portrait artist, but quickly discovered I wasn’t best suited to that career; the best portrait artists leave their clients half in love with them, whereas I think my sittings were more akin to spending time with the Gestapo. I can’t chit chat while painting, listen to Shania Twain on loop and am not very tolerant of ‘suggestions’. Suffice to say, it was a short stint, and I moved into painting animals, which are largely silent and un-opinionated. Here’s an example of one of my early portraits (paid model – did as was told.) 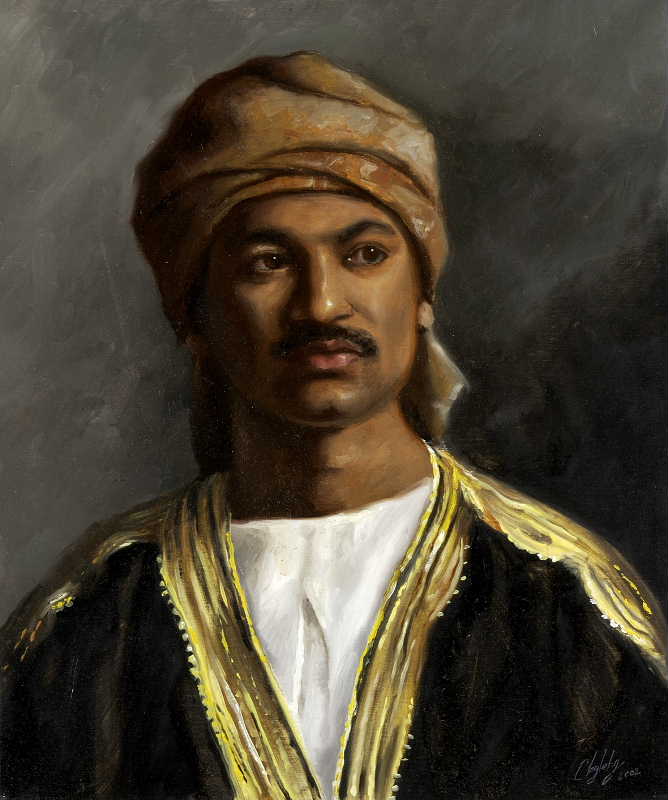 This brings us back to horses, and the next big competition on the horizon is the Society of Equine Artists which is held in the Mall Galleries in London. The racing paintings are progressing really well, creating the spray of paint and movement has been challenging, but despite a paint splattered spaniel have been mostly successful. Loving painting on a bigger scale too, the one below is nearly 4 feet wide. 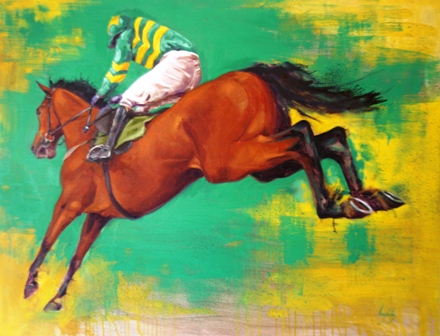 The Henley Arts Trail was a resounding success, hundreds people trooping through the studio doors, viewing and buying art. However next year, to save time, I might equip myself with one of these T-shirts…. 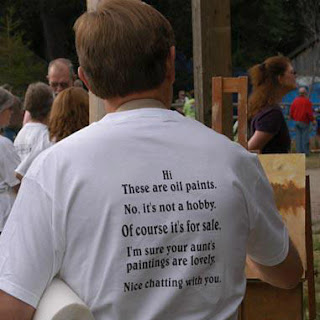 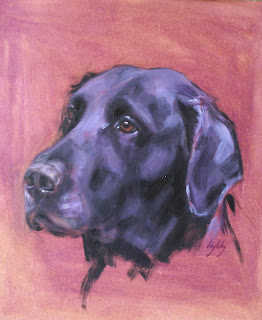 Lovely big dog, who had a weird habit of ‘grinning’, cute in real life but looks like an alarming snarl in photos – I choose a more traditional pose. Another commission for two more labs has just come in, plus the big painting of a half dozen collies that I have to fit in at some stage this summer.

Jubilee commission
IS FINISHED. Thank God. There have been many stops and starts, and a fair amount of sleepless nights, but finally it worked and is on it’s way to the fabulous Christina Leder for framing. She works in an extraordinary studio, a shed on stilts under a railway arch in Parsons Green, but makes exquisite frames. It’s going to be presented in August, and I’ll update the blog with photos then. I’m afraid it has to be kept under wraps untill then. 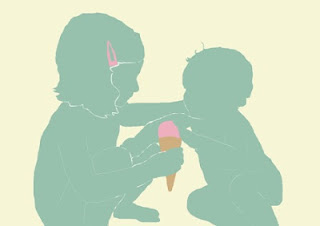 This is the first children’s commission I’ve undertaken, and it turned out pretty well. This method works so well for children (or dogs) and looks very dramatic when framed and hung. I also had a set of cards printed, great for thank yous!

Some of children’s prints are featured in this months issue of The Little Book a fantastic publication for parents in the Windsor/Marlow/Henley area.

I love this wistful old fashioned image of a shepherd, his dog, and some feisty sheep. This lino cut was based on some photos taken in Scotland, of Angus, the gamekeeper, shooing away some sheep, with his none too helpful Labrador.
I’ve painted Angus before, a few years ago now, he has a well lived in face.

After many frustrating hours, I bought a book on lino cutting, and had a bit of light bulb moment – less ‘eureka’ and more ‘DUH!’ So that’s how you do it. Multiple plate lino cuts to follow (ie: more than one colour, as the plate for each colour has to be carved on a separate plate.) This one of angus is a cheats version, as I’ve just filled in the colour digitally, but in my next spare moment I’m going to carve a couple of colour plates for it.

I finished this painting for my brother, as a gift for him and his new wife, Karen. The dogs, Gus and Torro, were fantastic to paint, such characters, and such a great contrast between them, Gus is wonderfully elegant, and mannered, and Torro, well, Torro is not. Can you tell which is which?!

The commission for June is taking shape, I have a rough composition in charcoal down on paper, and it is throwing up quite a few challenges.