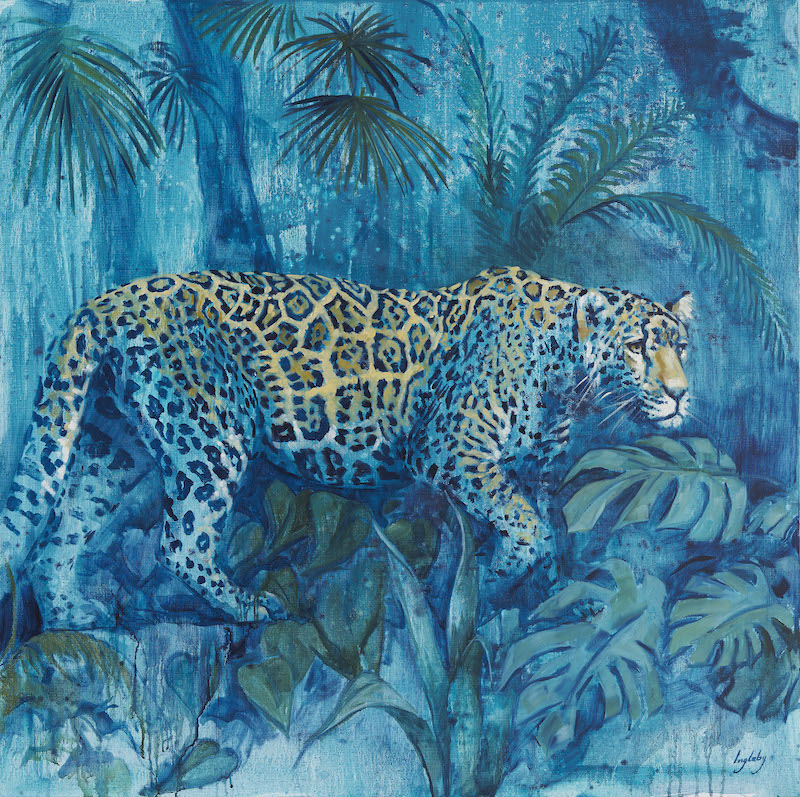 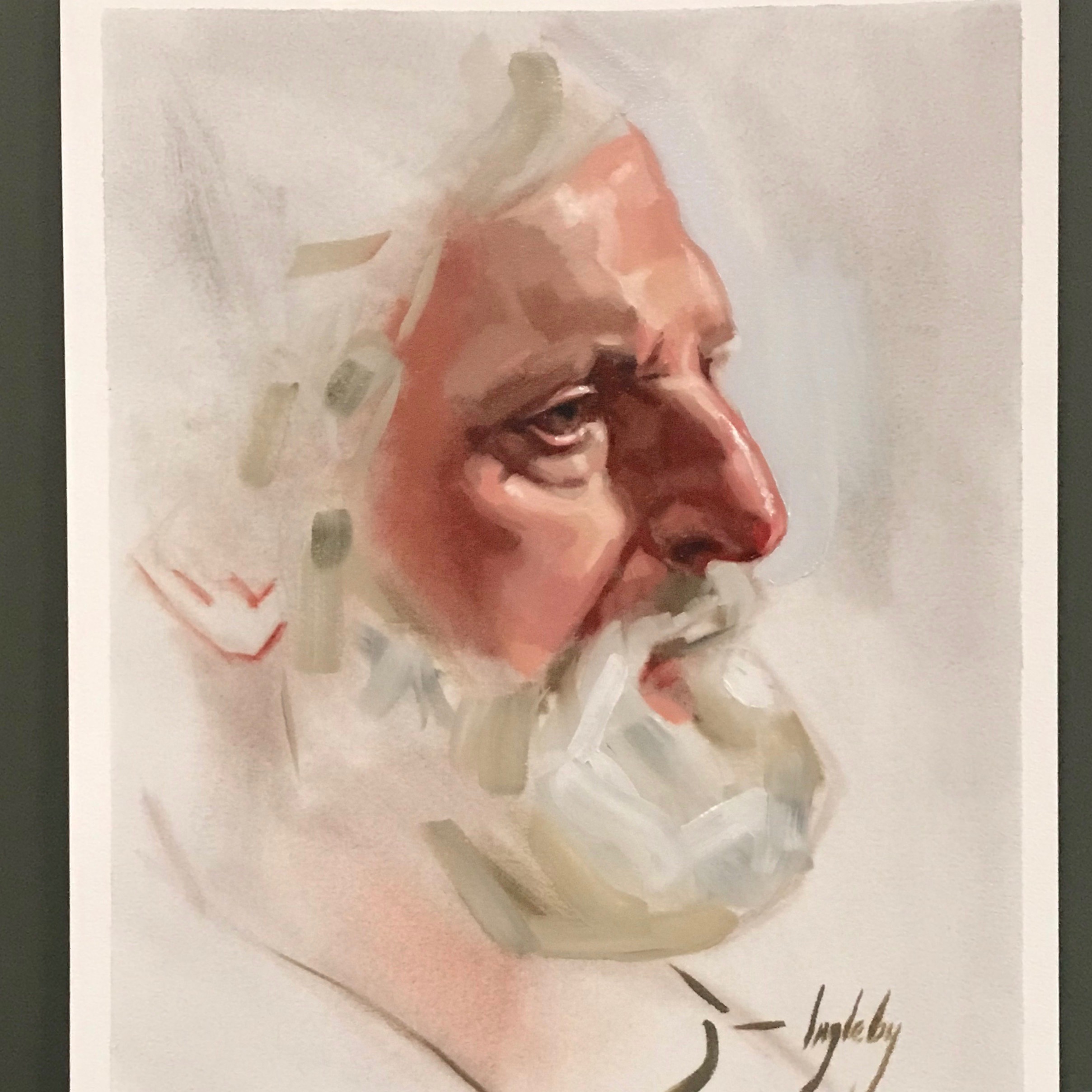 “Success is a string of failures” Vincent Van Gogh

There is no point in standing still as an artist, if we continue to paint same things over and over, sticking to the same formula, however successful, our work quickly becomes stale, and we tire of producing it, which in turn shows in the works produced. As we lose our passion the work lacks its fire.

You may know that I trained at one stage as a portrait artist, and for a while did commissioned portraits until my love of animals won over and I went back to painting subjects that couldn’t offer an opinion.

However, I’ve been dicing with figurative art for a year or two now but have not found it easy, much of the work has found its way onto the bonfire, or been tossed, crumpled, into a corner of the studio. I often find that the way out of a rut, or off a plateau is to step out of my routine and studio, and stretch myself a little harder; an etching course, life drawing or in this case an intense four day portrait workshop with a painter I hugely admire – Felicia Forte. She has that effortless style that makes you want to lick the painting, an ease and confidence in her work that is sorely lacking in my portraiture.

I considered joining her at the fabulous London Fine Art studios, but it’s close enough to commute, and I wanted to escape, albeit briefly, my domestic ties, so I could think of painting and nothing else. I signed up for the newly formed Raw Umber studios in Stroud, set up by former pupil of a LARA (a school coincidently I helped found, but that’s a story for another day)

Felicia is everything one imagines an artist to be; engaging, quirky with an absolute passion and dedication to her craft. (It irritates me that I feel I look so little like an ‘artist’, years ago a friend of my mothers told me I looked like a headmistress, I haven’t spoken to her since such was my fury, it touched a nerve as I suspect she may be right.)

We watched Felicia demonstrate a 3 hour portrait the first morning. She set out her deceptively simple formula for creating an accurate likeness. Drawing, shadow shapes, average tones, then work out from one area. Suffice to say it was considerably harder than it looked, and my first attempt that afternoon, though a reasonable likeness was a pale, chalky, muddled mess. My drawing skills are poor, rusty from over reliance on technology in the studio.

Day 2 was a full day painting, and I was allocated the same model all day. I spent a lot longer crafting a more considered drawing, and initially made a good start, but as the day wore on I tired, lost the simplicity of my tones, began to muddy the palette, and over work areas. The end result was ok, but not what I was hoping to achieve. I found myself using tiny brushes, dab dabbing at the same spots…

Day 3 saw another demo, this time, three portraits in three hours. An hour, 40 minutes, and 20 minutes. Watching Felicia, every brushstroke carries a considered conviction, rather than my more slapdash approach. She mixes the values and applies them with sparsity and economy but with a very definite confidence. No dabbing with tiny brushes… I took a quick trip to Pegasus art, a mere five minutes away, and equipped with a wolverine hand of large bristle brushes set to with the triple portrait challenge.

I learnt an incredible amount from this exercise, each short session revealing something new, and can see a real progression within the canvas of three heads. I think by the last I had finally begun to observe and mix correct colours, rather rely on preconceived ideas of colour. As I grew in confidence I painted faster, so although the third sketch is in less than half the time of the first, I got almost as much information down. A nugget of information from Felicia was that the head tends to get cooler as you move away from the light, so the upper tones are yellow, the middle tones red, and lower third cooler. We were using a ‘Zorn’ palette, which is restricted to Cadmium red, Ivory black, Titanium white and Yellow ochre. It’s been ages since I used a restricted palette, and it was fascinating to find the ranges of tone and colour you can achieve. My plan is to eventually move towards a very extended palette, and colourful portraits but it has been a useful exercise slowing down, and really taking the time to observe & mix the correct colours within the face.

Most of the class went for dinner that evening, though we resisted the nightlife of Stroud as day 4 was an extended pose, 6 hours on the same model. I was pleased with my mornings work, the drawing coming more naturally by now, and managing to find mostly correct tone and value for a challenging pose of strong shadow and highlights. I changed for the afternoon, to other extreme of light and half tone on the other side of the face,  it my focus and stamina were flagging, and although it is a reasonable job, my mind was beginning to wander towards the following week, and the return to my family and home.

It was truly a privilege to study with Felicia, to have a few days (thank you Peter/Jane!) to focus solely on my beloved painting, and I feel I have learnt an unbelievable amount in a short space of time. It has come at an opportune time for me, as I was struggling with working in solitude, and after a relentless few months of commissioned work was in dire need of a reboot of inspiration and passion. Art is an odd career, I am often told how lucky I am to do what I love for a living, and I agree, I am. However it is a blessing and a curse, as in order to make a living, your passion must also become your job, and after a while any job, if you do for long enough, starts to feel, well, like a job, and less like something you love to do. Sometimes stepping outside the box (or studio) gives you a fresh perspective and in this case has definitely re awakened my passion for painting.

I can’t wait to get back into the studio this week, I must just find some socks for my son…. 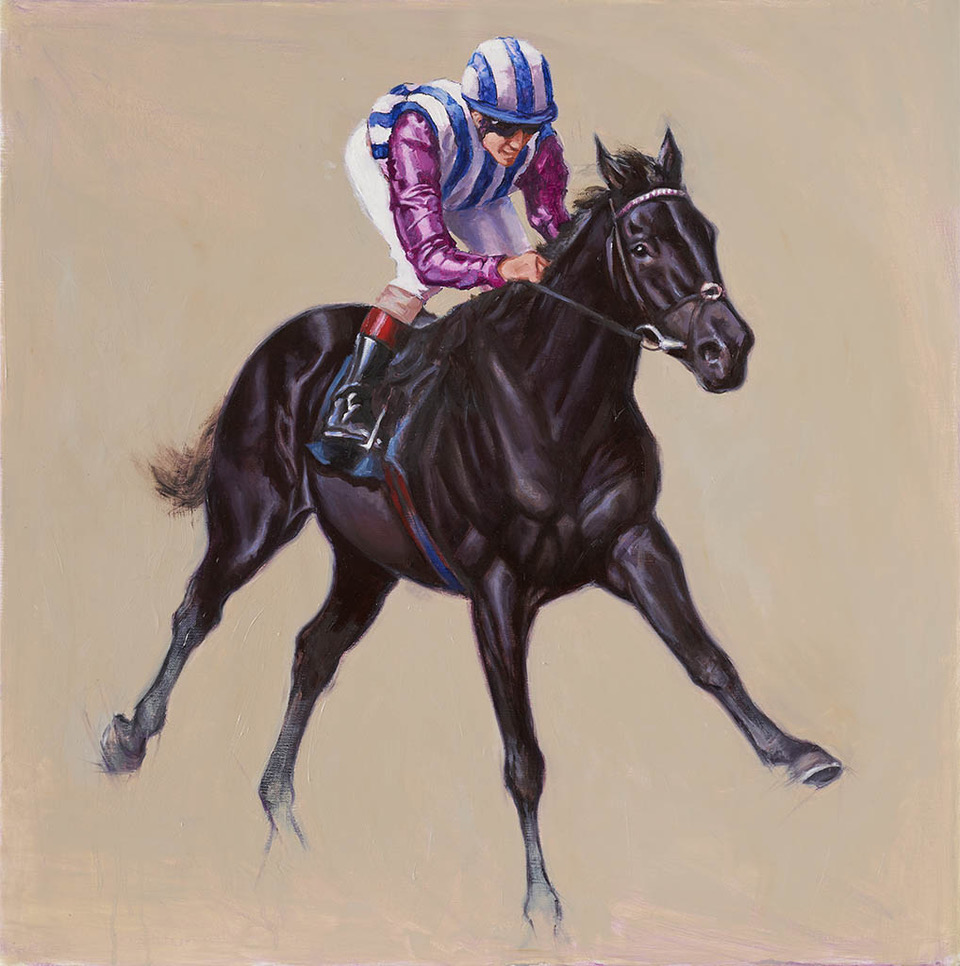 I’m often asked questions about the process of commissioning a portrait or artwork, so thought I’d go through some of the most frequently asked queries. I absolutely love doing portraits, I think it is one of the few jobs where you are truly pleased to make your client cry (with joy hopefully!).

There is something about a painting that no photograph can ever match, for while a photograph captures an instant, a good painting will represent the essence of its subject.

I would like clients to allow a good couple of months for portraits, sometimes I can fit in an emergency project, but as my waiting list grows longer this is far less likely. I find often that liaising to meet, and take the reference photos can often be the stumbling block for time. I always take my own photos as it makes for much better portrait if I have met my subject. Many clients prefer to give one of my beautiful vouchers as a present so the commission can be arranged without the pressure of secrecy or deadlines, and the recipient is fully involved in the commission process.

As rough guide drawings start from £450 and paintings from £650 but I am always happy to try and work to a smaller budget if needs be.

The medium I use may depend on the subject, black dogs lend themselves well to charcoal for example, whereas brown colouring will be lost in charcoal or pencil. I find that where the colouring is important in the subject, oil works better. My two spaniels are blue roan and tan, and their pretty tan eyebrows and paws would be lost in a monotone drawing. 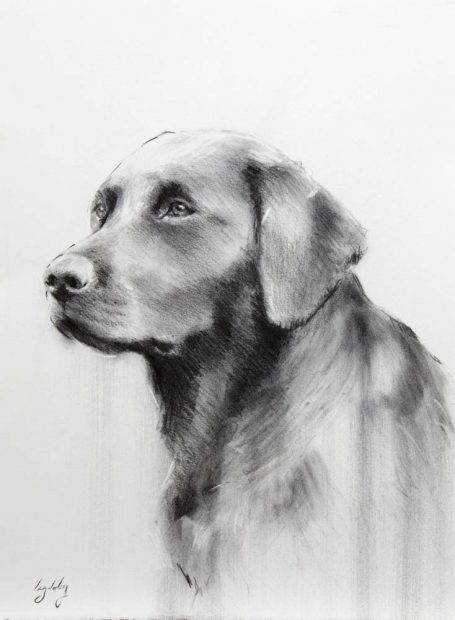 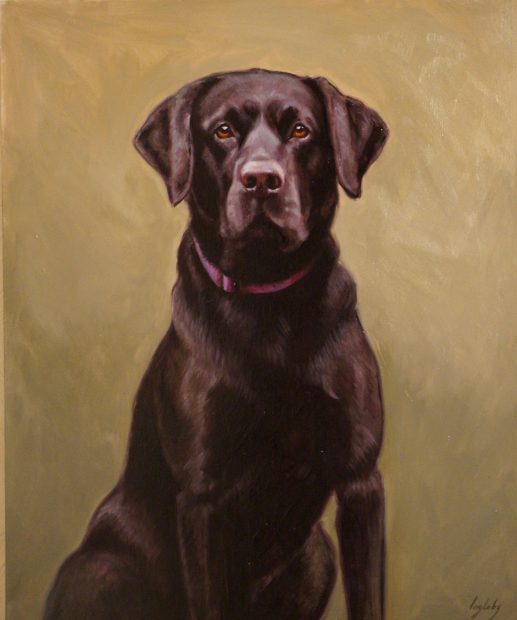 Once someone has approached me in regards to a commission, I will send through the price list and commission contract for you to read through . This will give you a guide to the costs and process. Once a rough idea of size and medium has been decided I will come and take the photos. I then contact you after I have edited the photos to confirm the sizing, price and time frame. At this stage we sign the contracts and a 30% deposit is taken. I will order the canvas, which are made bespoke to my specifications on aluminium frames and heavy Italian linen. The drawings are done on 600gsm Fabriano Artistico paper, which I hold in stock. For larger or more complicated portraits I will do several composition sketches and send them via email for your approval. As the painting or drawing nears completion I will send another proof, so minor changes can be made. I do ask that you come to the studio for final approval, as viewing a painting in the flesh is so very different from seeing it on a 4″ phone screen! Assuming all is well, final payment is made, the painting is signed and varnished, and will be ready for collection shortly after.

I can do one style of frame, a black Larson Juhl moulding with a linen slip, but for a wider choice have an excellent local framer I am happy to recommend. 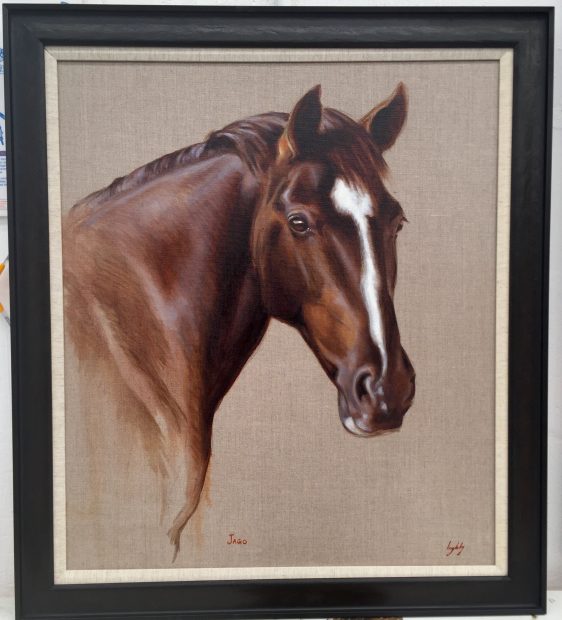 We can deliver work worldwide, as I understand that studio visits are not always possible. For this I do ask that the commission is given sufficient drying time before shipping.

I am now taking my last bookings for Xmas 2018, and have a couple of spaces left. If you’d like to contact me please do have a browse through my commissions page, and email me on catherine@catherineingleby.com 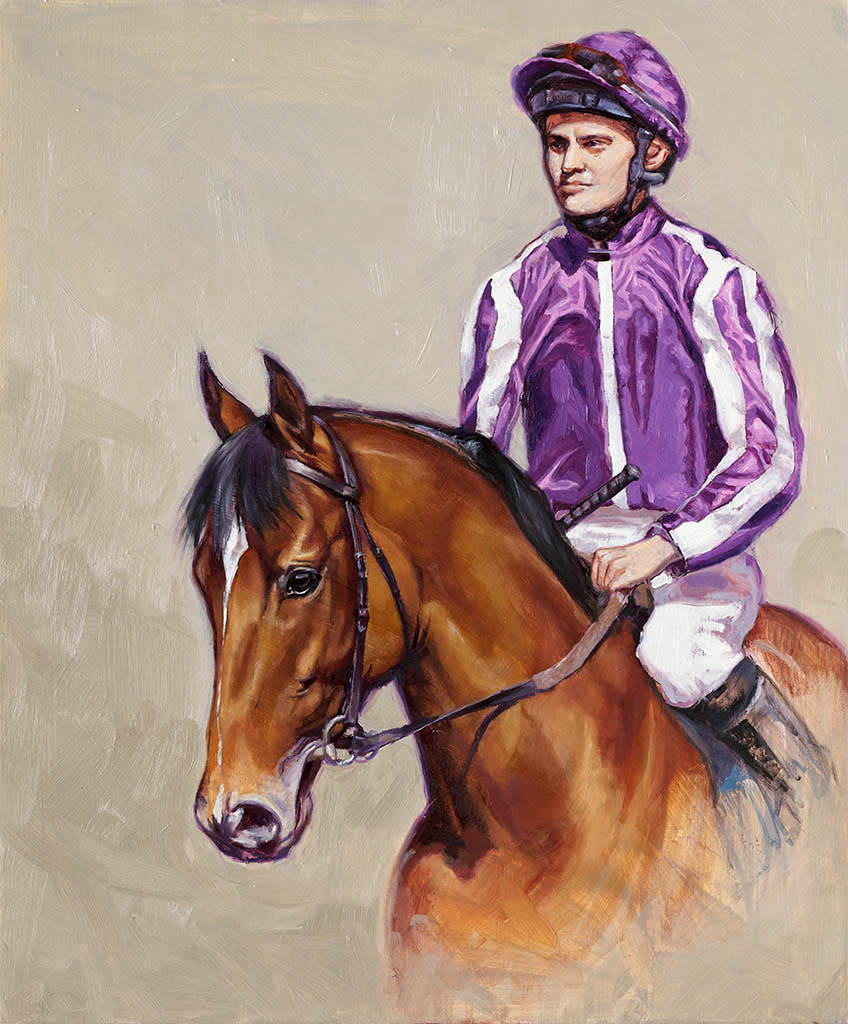 It’s been a very busy few months – I’ve finished a series of racehorse portraits, and am finally able to share a couple of them with you! I’ve so enjoyed doing these this year, they have been a welcome challenge in many ways, and a steep learning curve. I have spent many, many hours learning to paint silk, the nemesis of fabric for an artist (although tartan comes a close second…)
I have also had a complete refurbishment of the studio, which is incredibly exciting.

The original and prints of Saxon Warrior, winner of this year’s 2000 Guineas, are available to buy through my website.
I am now taking commission bookings for Christmas, so please book early if you’d like one completed in time.

Isobel Burns, the founder of Online Social Media Marketing & Training, and I have teamed up for a ‘Business for Artists’ workshop on the 25th September

Places are limited and can be booked HERE 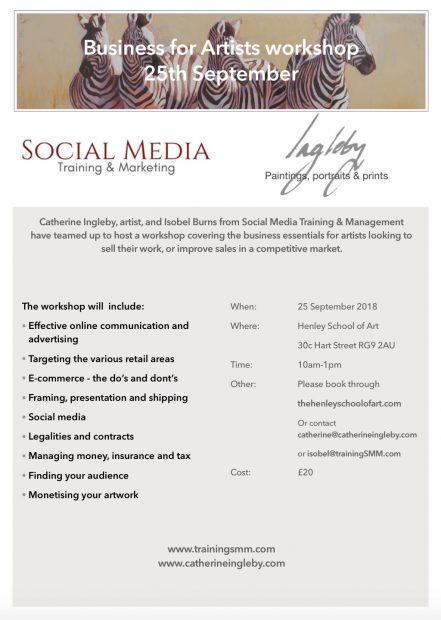